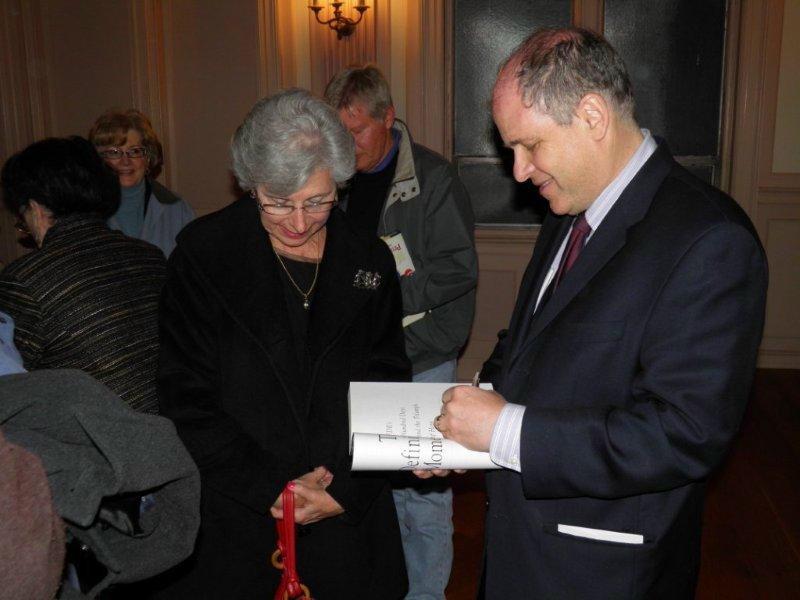 Author and journalist Jonathan Alter signs a copy of his book. Author and journalist Jonathan Alter signs a copy of his book.

A goal of the NJ SPJ Pro Chapter for the past couple of years has been to enter into partnerships with other organizations.

We got the chance to do that on April 27 when we joined with the Friends of Rutherfurd Hall and the Allamuchy Township Board of Education to present author and journalist Jonathan Alter speaking about President Franklin Delano Roosevelt in the elegant country house that was once the home of Lucy Mercer Rutherfurd, FDR’s mistress.

The house, Rutherfurd Hall, constructed by Winthrop Rutherfurd in the early 20th Century, it is now owned by the Allamuchy Board of Education and it serves as a school, museum and event venue.

Although he constructed the mansion for his first wife, after her death, Rutherfurd married Lucy Mercer, former social secretary to Eleanor Roosevelt.

Alter brought those figures to life to an audience of about 150 people in the chapel that was created when the old country house was used as a nursing home for retired nuns.

“She was not Rielle Hunter,” Alter said about Lucy Mercer Rutherfurd. She was also no Nan Britton (Warren G. Harding’s mistress who had a child, author of the book The President’s Daughter.) She was not Kay Summersby or Judith Campbell Exner or Monica Lewinsky, Alter insisted. Mercer was a class act, “she took her secrets to the grave and, different from other mistresses and famous men, they were in love,” Alter said.

Also a class act was Eleanor who never shared a bed with Franklin after she learned of the affair, in 1918, but stuck with him.

She discovered the affair when FDR, then Assistant Secretary of the Navy, returned from a trip to Europe. He was ill and because this was in the midst of the Spanish Flu pandemic, he was rushed to their home on East 65th Street. Eleanor was unpacking her husband’s bag when she discovered letters from Lucy.

The discovery, and how she handled it, created the Eleanor Roosevelt the world came to know, a strong woman with her own causes and a great leader. Alter compared it to Theodore Roosevelt becoming the TR the world knew after the death of his first wife, Alice, when their daughter was born and the death of his mother the next day. That sent TR west and he returned with the persona that led him to the presidency. Eleanor, daughter of TR’s brother, Elliot, was Teddy’s favorite niece.

Even Eleanor’s cousin, Alice, Teddy’s eldest child, didn’t spill the beans, although she knew for years and was no fan of Franklin.

The story is that Eleanor offered FDR his freedom, but his mother, Sara Delano Roosevelt, threatened to disinherit him in the case of a divorce. Possibly even worse, FDR’s most trusted aide, Louis Howe, told him he could forget his political career if he got divorced and married a Roman Catholic.

Obviously that political career was important. FDR was elected a state senator and then governor of New York.

Be the first to comment on "FDR and his mistress"