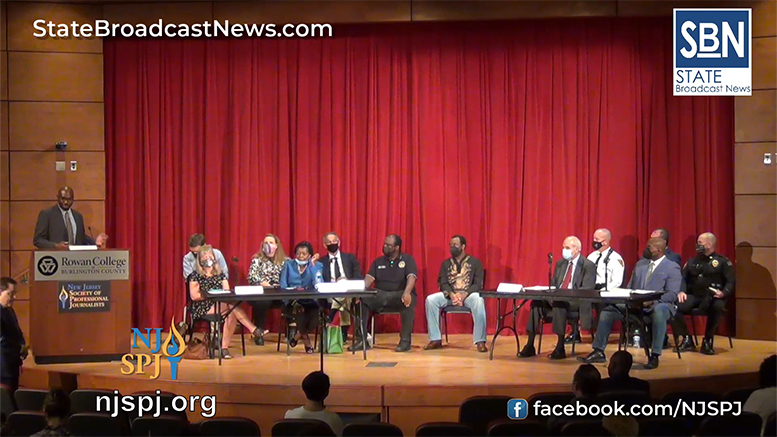 A candid, sometimes contentious, discussion about race dominated the in-person panel discussion on September 22 in Mount Laurel, on “The Press, the Police and the Public.”

About 67 people attended the event, which was sponsored by the NJ Society of Professional Journalists (NJ-SPJ), along with the Keystone Pro Chapter of SPJ, the NAACP of Southern Burlington County and Rowan College at Burlington County, which hosted the event in a large auditorium to facilitate social distancing.

The discussion began with an examination of the “racist rant” in Mt Laurel over the summer.  Both journalists and the NAACP discussed the need to focus on more than just the most dramatic moments of a story, with both illustrating ways for the public to get more information.  In answering audience questions, reporters pointed-out ways to find good, informed journalism.

The 90-minute event ran an hour long, with many people staying beyond that.  There were heartfelt questions from the audience, mostly directed at law enforcement people on the panel.  Questions came not only from students, but from an FBI agent and a former DEA agent in attendance. Both men are Black and both attended at least two training camps for officers.  They discussed racist aspects of law enforcement training and recruitment.

Links to more resource information provided by participants will soon be posted on this page. Please check this page in the next several days.

Next month in Newark, the next session of “The Press, the Police and the Public” will be held on the evening of Thursday, October 21st and will be broadcast live on WBGO-FM.  Not all of the details are set at this time, but they will be posted on njspj.org.  More sessions are planned throughout the state.

You can watch the entire panel discussion in the player below.

Blake covers the New Jersey attorney general’s office, state police and prison system for The Star-Ledger and NJ.com, where he was previously on the data and investigations team.

He has covered the Missouri statehouse for The Associated Press, reported abroad for Public Radio International, filmed for The Wall Street Journal, hosted Investigative Reporters and Editors’ podcast, contributed reporting to The New Yorker and drawn for Poynter.

He spent several years writing for magazines in Guatemala and has shot video with UNICEF, World Vision and other non-profits throughout Africa, the Americas and the Caribbean. He earned a graduate journalism degree at the University of Missouri.

April Saul is a Pulitzer Prize-winning photojournalist whose lifelong mission has been to help people understand each other better through her writing and photography. She fell in love with Camden in 2011 at a time when the city was bleeding badly, and left her staff job at The Philadelphia Inquirer to dedicate herself to covering the challenges and joys of Camden residents on her Facebook page, CAMDEN, NJ: A Spirit Invincible, where her essays about that city appear several times a month.

Dr. Amber Ciccanti served with the Willingboro Police Department as a patrol officer, detective, and sergeant. She has a master’s degree and a doctorate degree in the field of criminal justice and serves on the faculty of Rowan College at Burlington County.

Joe Rizzo comes from a background in corrections, serving the New Jersey Department of Corrections first as an educator, then as an education director, next as an assistant superintendent, and lastly as superintendent (warden), of two different prisons. He is a faculty member with Rowan College at Burlington County in the Criminal Justice Department.

Office of the Attorney General

The Office of the NJ Attorney General will have a representative on-scene to provide news and answer questions.

Cherry Hill Police Chief William “Bud” Monaghan has more than 25 years of law enforcement experience. He is a graduate of Rowan College of New Jersey, earning his Bachelor of Arts Degree in Law Justice in 1994 and a Master’s Degree from Seton Hall University in 2001. Chief Monaghan was a certified instructor for both the Burlington and Camden County Police Academies from 1997 to 2010.

Rich Rivera is the Police Director in Penns Grove, NJ. He is best-known for working with the FBI on New Jersey’s largest police corruption case. More than 35 people, including a dozen cops were convicted of federal racketeering-related crimes. He co-founded the National Coalition of Latino Officers. He earned his Master’s Degree in Criminal Justice from New Jersey State University.

Corey Jones served with the Mount Laurel Police Department for 25 years, retiring as a sergeant. He was also a member of the SWAT Team for over fifteen years and became one of the leaders of the Burlington County Regional Team. he is also an instructor in verbal de-escalation and weapons platforms at his business, Safetyman Consulting.

Chief Brian Pesce began his career as a patrolman with the Bordentown Township PD in 1998, working his way up to Chief of Police in 2018. Chief Pesce has instituted a culture of community policing, improved transparency, de-escalation, officer wellness and safety and increased diversity.

Marcus Sibley is the Chairman of the New Jersey State Conference NAACP Environmental & Climate Justice Committee, Chairman of the New Jersey Progressive Equitable Energy Coalition (NJ PEEC), and the President of the historic Southern Burlington County NJ NAACP Branch. He is the the architect of the Empowerment Workshop Series and a graduate of Rutgers University, where he received undergraduate and graduate degrees in Social Work. Mr. Sibley is also the owner of consulting & integrated marketing company Sanaa17 LLC.

Tyrus Langston Ballard is the 1st Vice President and Political Action Chair for the Southern Burlington County NJ NAACP (SBCNJ NAACP), Sergeant at Arms for the South Jersey Young Democrats Black Caucus (SJYD-BC), a core member of Black Lives Matter NJ, and a coach for the Willingboro/Burlington chapter of the New Jersey Orators (NJO). He is a 3-time NAACP Freedom Fund Award recipient.

Kenneth Burns is WHYY’s South Jersey reporter. He joined the station in 2018 as an anchor. He also contributed stories and won a 2020 Keystone Media Award for one of them.

Prior to WHYY, he covered city government and urban issues for WYPR in Baltimore, his first stop in public media. His coverage of the Freddie Gray police trials won a 2017 National Headliner Award. Burns began his career shortly after high school as an intern and later news assistant at WTOP in Washington, D.C. He would go on to work for several commercial broadcasting outlets as a reporter, anchor, and producer in the D.C. and Baltimore metro areas.

The native Marylander and recently adopted New Jerseyan is a graduate of Towson University and Anne Arundel Community College.

One Year After George Floyd Was Murdered, NJ Institute for Social Justice and ACLU-NJ Release “To Record and Protect”