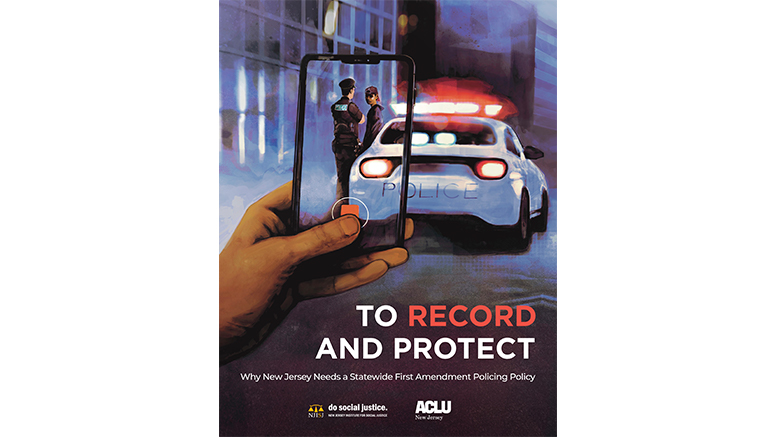 NEWARK, NJ – One year after George Floyd was murdered by a police officer in Minneapolis, the New Jersey Institute for Social Justice and the ACLU-NJ (the “Groups”) today released To Record and Protect, a policy brief arguing for Attorney General Grewal to establish a First Amendment Policing Policy to reaffirm the rights of community members who record police encounters.

“George Floyd. Eric Garner. Walter Scott. Freddie Gray. Alton Sterling. We know these names because concerned bystanders bravely recorded tragic acts of police violence. How many more names do we not know and how many stories will we not hear, simply because no one was there to record?” ask the Groups in the brief.

With camera phones ubiquitous, many New Jerseyans have the ability to record at a moment’s notice. Videos and recordings of police encounters can be critical tools in documenting abuse and holding law enforcement accountable.

“As we seek to increase transparency and build trust, it is critical to empower community members – just like Darnella Frazier, who filmed George Floyd’s murder – to hold law enforcement accountable through exercising their First Amendment rights to criticize and record police conduct,” stated the Groups.

Listen to an audio interview with ACLU-NJ Staff Attorney Tess Borden in the player below. (Courtesy StateBroadcastNews.com)

The U.S. Court of Appeals for the Third Circuit, New Jersey’s Appellate Division and the U.S. Department of Justice all agree that the right to receive information and ideas laid out in the U.S. and New Jersey Constitutions includes the ability to record police conducting their official duties. Thus, if police officers try to intimidate or otherwise prevent residents from recording, they may be infringing on First Amendment rights.

The Groups argue that while New Jersey has taken some important steps in its police reform efforts, “[r]eform means nothing without accountability to the communities served. New Jersey would miss the moment if it were to overlook the importance of reaffirming the First Amendment rights of community members in interacting with police officers.”

The Trentonian and Avilucea notch a big press-freedom win

Be the first to comment on "One Year After George Floyd Was Murdered, NJ Institute for Social Justice and ACLU-NJ Release “To Record and Protect”"