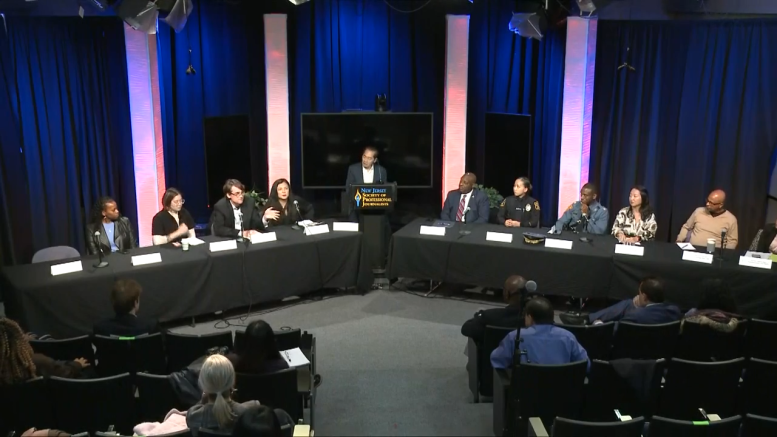 This program is over, but you can watch the entire panel discussion in the video player below.

Mary Chao
Mary Chao is an award-winning journalist who covers the Asian community and real estate with a bi-monthly column on Asian American issues. She joined The Record/NorthJersey.com in 2020 after 21 years as a reporter and columnist at Rochester Democrat and Chronicle.

Taylor Jung is a multimedia reporter on the social justice beat. In 2021, she joined NJ Spotlight News, which is seen weeknights on WNET/Channel 13 and NJTV. Much of her reporting has been on multiracial identity and issues facing the Asian American and Pacific Islander community.

Riley Yates is the lead data reporter for NJ Advance Media, writing for http://NJ.com and The Star-Ledger. Among many topics, his reporting examines possible ethnic bias in ticketing on NJ highways and diversity data illustrating how NJ police departments skew white.

Bergen County Sheriff Anthony Cureton is a law enforcement professional and community leader with more than 33 years of experience.

As Sheriff, Anthony leads a team of 600 officers and civilians, safeguarding close to one million residents living in 70 municipalities.

Detective Janet Thai is the president of the NJ Asian American Law Enforcement Officers Association. She works in the Office of the Attorney General. Her grandfather was a Vietnamese soldier from the South who fought alongside the U.S. military. His example inspired her to become a United States Marine.

﻿Chang Lee is the anchor of KBTV, which reaches over 50,000 people in New Jersey. He is also the president of the Korean American Association of New Jersey

Assemblywoman Ellen J. Park is a lawyer who was elected in the in 2021 to represent NJ’s 37th legislative district, which includes much of Bergen County. She is the first Korean American woman elected to the legislature. She encouraged bills, now signed into law, that require school social studies courses to include the history and contributions of Asian Americans and Pacific Islanders.

Dr. Balmurli Natrajan is an anthropology professor at William Paterson University. His research and teaching focuses on caste, race, labor, and international development.

Click on the image below to register for the event.